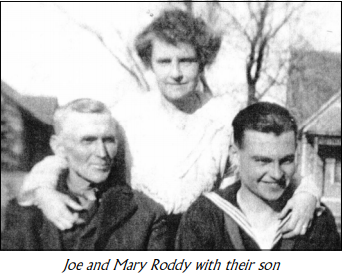 Born in Ireland in 1867, Joe Roddy came to North Platte in 1886 and was hired by Union Pacific as a call boy in 1887. Before the age of the telephone, call boys ran through the neighborhood summoning rail workers when they were needed for their regular or special runs. Joe then became a hostler, moving locomotives from one area of the rail yard to another. He was then promoted to engineer.

However, tragedy struck in 1898. A train engine toppled over, damaging his leg so severely that amputation was required. After 18 months, he returned to the railroad as a flagman at the Willow Street crossing, a position he held for 31 years. While this was a lesser position than engineer, Joe took his misfortune in stride and became a fixture in North Platte.

His sunny disposition and his special care in helping children cross the track safely left to residents calling the Willow Street location “Joe’s Crossing.” His obituary noted that Joe “added a great deal to the sum total of the world’s happiness.” He retired from UP in 1929 after 42 years of service, and passed away in April 1938.